In the previous article, I answered, among others, the following question – why, in my opinion, traditional sports are so important nowadays, describing the first part of the World Sport for All Games – you can read it here.

I also presented there three, Polish traditional sports – the Netringball, the Chapel and Polish Ringo.

Below, a continuation of my story about this, unusual sports event. This time, I am focusing on the selected examples of interesting, traditional sports from different countries around the world.

Traditional sports and games at World Sport for All Games

Swedish delegation showed their native game, called Kubb. It is said to have had its roots in the times of the Vikings (VIII-XI century). Forgotten for centuries, it has been reactivated on the Swedish island of Gotland in the 1990s.

Today, it is a very attractive, recreational game that everyone can play. 10 wooden blocks are placed on the playing field, 5 on each side, facing each other. In the centre, there is also “the King” – the largest figure in the game.

Players or teams line up opposite each other behind their blocks (each has 5 of them). The task of the starting team is to knock down 5 opponent’s blocks, by throwing a wooden stick at them. At the end, there is still the “King” to be knocked over (you must do it at the end, and not before knocking down all 5 blocks from the end-line).

You can also play a more complicated and much longer version, in which, after the blocks are knocked over, the opposing team picks them up, throws them to the opposite field of the pitch and starts knocking the opponent’s blocks from these ones, and only after that it knocks down the remaining blocks.

During my practical activities, both indoors as well as in the open air, kubb works great as a simple, entertaining and engaging game not only for children, but also for adults, the elderly, people with disabilities – simply with everyone.

It can be easily adapted to the different needs of the players – you can increase or decrease the playing field, you can play simpler or more complicated version, throwing sticks or using  bean bags (which are softer and safer for children), play one-to-one or in teams etc.

It’s just a simple game that is funny, integrative and can be very engaging!

The hosts of this event – Lithuanians – presented their traditional sport called Ritinis, little known outside their country. Mentioned in historical sources in Lithuania as early as in the 17th century, it was in the past an entertainment of the shepherds, who were playing it in the fields.

The inhabitants of the entire villages were also competing with each other and the game was played over a very large area.

In the 20th century, a physical education teacher transferred this game to football stadiums and adapted it to modern conditions and needs. Ritinis National Championship has started at the beginning of the 1960s.

Today, Ritinis is a team sport, with some similarities to field hockey, but with different rules of gaining points. Two teams of 7 players (6 + goalkeeper) compete on the football pitch. They hold curved sticks (called ritmuses) in their hands. Their task is to throw a type of rubber disks (with the same name as the sport itself), held in their hand, to the other side of the field, so as to place it into the opponent’s goal or to pass it over the end line on the opposite side.

The opponents, using the aforementioned sticks, try to stop the disc, rolling towards them, and then to throw them back to the other side of the field. The team that gets more points, awarded for scoring a goal (3 points) or passing the disc behind the opponent’s end-line (1 point), wins.

Ritinis is considered to be the only native-born, folk game that has been transformed into a national Lithuanian sport. At the World Sport for All Games in Siauliai, Lithuanians were showing it by playing matches at the local football stadium.

Latvians presented a completely different sport – Novus, somewhat similar to billiards. The task is to insert as many plastic tokens as possible into the four holes in the corners of the table with the help of the cues, a bit similar to the billiard ones, but shorter.

A hundred years ago, it was a sailor’s game, cultivated in the port cities of Latvia (Riga, Liepaja or Ventspils). In the 1930s, Novus was granted a status of the “national sport”. Its popularity then increased significantly.

Today, Novus has its own federation, tens of thousands of players play it and it is one of popular elements of native sports culture in Latvia. It has several levels:

Estonians presented a spectacular, local form of acrobatics, closely related to Estonian culture – an unusual swing that allows to make a 360 degrees rotation in a standing position, called Kiiking.

The name “kiiking” is derived from the Estonian word kulakiik, literally meaning “a village swing”. In the past, it was a large, wooden construction on which many people were swinging together at the same time. It used to be a typical part of the Estonian landscape and was accompanying Estonians’ youngsters meetings in the open air, dating back to the Pagan times.

For centuries, these swings were made of wood. In the 20th century, metal swings has begun to be introduced, becoming  increasingly longer. Thanks to that, more and more spectacular, acrobatic turns could be made.

Within time, Kikiing has started to be seen as a sport. People have started to practice it also indoors what has allowed them to do it all year round.

Various competitions began to be organized in the sports version of Kiiking. There are even Guinness World Records in the longest (and the highest) successful, 360 degrees, rotations. In 2012, it was 7.04m (nowadays it is 7,38).

According to a Kiiking specialist, a former player and a promoter of this sport in Estonia, Kiiking is still an important element of sport culture in this country. Along with metal constructions, many traditional wooden swings have remained in Estonia. To this day, Estonians meet and integrate, especially in the spring and summer periods, and a frequent element of these meetings is swinging together.

Therefore, Kiiking has developed from the local, folk pastime into sport and today it is an interesting element of Estonian, physical culture.

Belgians showed their interesting and popular type of traditional shooting – popinjay. It comes from medieval shooting traditions (still strong in Belgium). In the past, the contestants were shooting to parrots and later to their wooden figures (popinjay = parrot), using longbows and later also crossbows. It was a very popular form of entertainment and shooting training in many European countries.

A specific form of this tradition was adopted in Belgium, and especially in one of its regions – Flanders. Here, you shoot not at a horizontally set parrot-shaped target, but at vertical targets, suspended even 80 meters (!) high, trying to knock them down with special longbows.

In Lithuania, the Belgian delegation presented its simplified version. Everyone interested was shooting, using plastic bows, aiming at the balls suspended at a low height (see the picture below). I personally tried to shot, but knocking down the balls turned out to be a difficult task to me 🙂

In many places of the world, there are also various so-called deck games. They have most often developed as a form of recreational entertainment for the passengers of cruise ships at the beginning of the 20th century.

One of these games is shuffleboard. Some people call this the board version of curling. The players’ task is to place the pucks in the highest scoring fields with the help of specific, curved sticks.

In Lithuania, it was presented by the delegation from the United States. However, which country can claim to have invented this game, still gives rise to some debates.

The Japanese delegation presented an interesting game with the use of balls and small gates, similar to English (though with roots in medieval France) croquet. Its English name is gateball. It consists in hitting the balls through small gates with the help of sticks, so as to reach the finish line in the least number of strokes.

An interesting and entertaining game in Lithuania was also Spanish la rana (Eng: the frog) – an old, tavern entertainment – very popular in medieval Europe, having its opposite numbers also in the other countries.

The player tries to throw the type of tokens into the “mouth” of the frog figure, placed on the peculiar board, for which the player receives the highest number of points. For successfully throwing into the other holes on this board, he/she gets correspondingly fewer points.

La rana is a funny game that in the past and also today gives a lot of pleasure and provides everyone with entertainment.

I was trying to successfully throw the tokens into the frog’s mouth, but it turned out to be very difficult 🙂

As far as team games are concerned, Irish delegation presented the so-called Gaelic football. It is a sport a bit similar in its course to American or Australian football and rugby.

This a contact sport (or, as some say, collision sport;)), which has gained the status of a national sport in its homeland –  Ireland. Along with the second, traditional Irish sport – hurling – they are among the most popular sports in this country.

Romanians presented a sport similar to American baseball, Polish palant or Finnish pesapallo – called Oina. This is of a sport, played by two opposing teams.  The player from one team hits the ball into the field with a bat. However, he does not hit it after the opposing team’s pitcher throws it (like in baseball), but tosses it to himself and then hit it forwards. Afterwards, he runs and tries to get the consecutive bases.

The opposing team’s players try to catch the hit ball and pass it back to the base before the pitcher reaches it. The rules of the game are similar to the baseball ones. Here, however, there are 11 players in one team (in baseball there are 9).

At the World Sport for All Games in Lithuania, everyone interested could also play many other games and plays from around the world. It was also possible, among others, to… climb the so-called mât de cocagne (greasy pole), which used to be a kind of a ludic challenge, known in many places in Europe. The prizes were, for instance,  some good food and wine or even pouches with money.

In Lithuania, there was no prize at the top of the pole, but the fun was great anyway.

Having fun together, active participation in all these sports has been an unforgettable experience for people from all over the world.

A true celebration of sport for all in a friendly, international peaceful atmosphere – this is the message of traditional sports. It sounds pathetic, I know. But isn’t it what our modern world REALLY needs?

Soon, I will continue with the third  – and the last – part of my story about this extraordinary sports event. 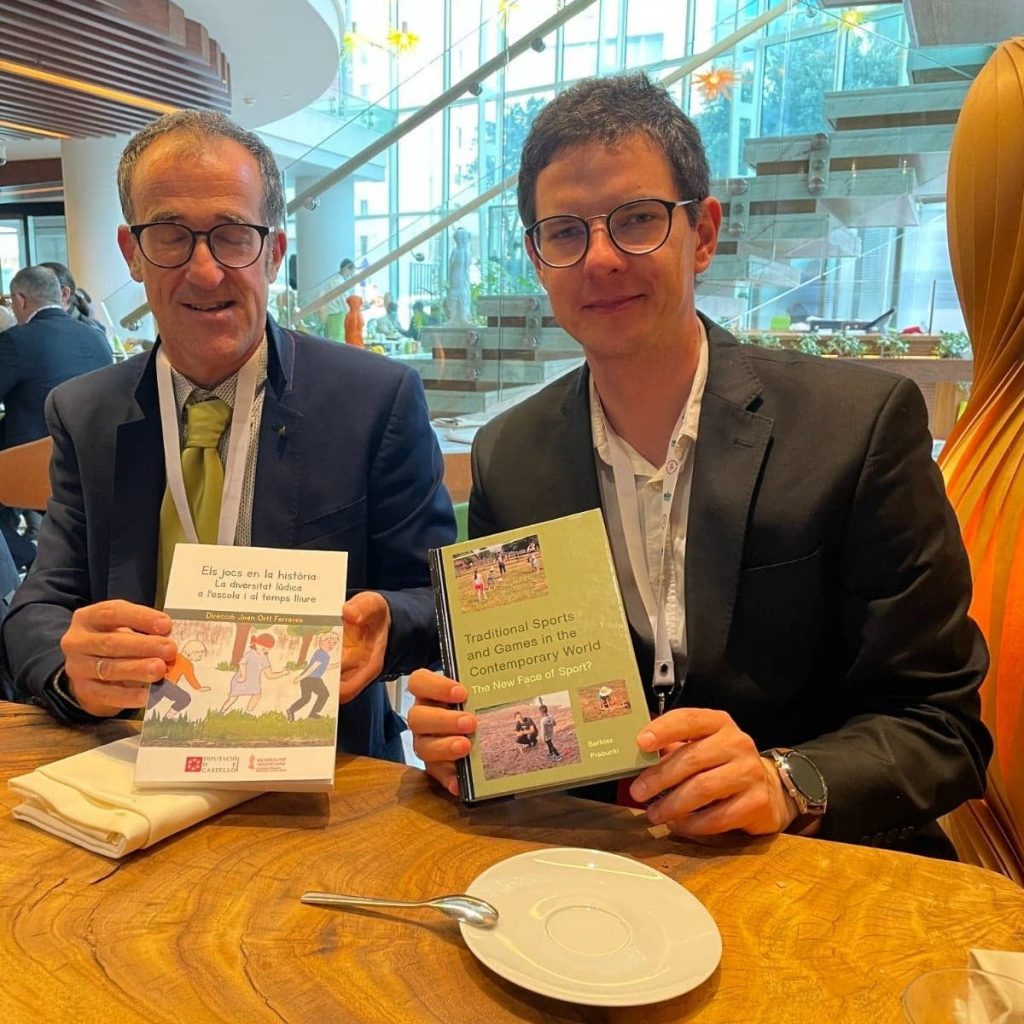