When I first came across the subject of traditional sports and games, I immediately liked them. “This is something else – I thought – something little known but very valuable“.

I have started from reading about them – the authors claimed that these games are:

OK, but what does it REALLY mean?

What are their genuine values? What can they bring to our lives?

Thanks to one, special event, I have found an answer for these questions (at least to a certain extent) and … my journey with traditional sports has begun...

The World Sport for All Games in Siauliai, Lithuania

It happened in 2012. I started my PhD studies at the University School of Physical Education in Poznań with a strong motivation to make my dream come true – to write a PhD and become a doctor. The subject of my thesis could not be different than … traditional sports and games 🙂

After just a few months, I received a great opportunity to see many such sports and games during a unique, sports event.

5th TAFISA World Sport for All Games were held in Lithuania, 2012 in a town located in the north part of the country – Šiauliai. We went there with a group of students and doctoral candidates from the University School of Physical Education in Poznań to represent Poland and to promote Polish traditional sports, among others:

At the very beginning of our stay…  a small surprise – the conditions in which we were supposed to live were, to put it mildly, not the best possible 😉 But it was not the most important thing.

A big and unusual, sporting event was waiting for us. Delegations from all over the world came to Lithuania to present their traditional sports and games.

Perhaps not all of them have understood the idea behind this event. The Scottish delegation, instead of showing their own traditional sports (which they have a lot), presented … Japanese karate 🙂

Most of the other delegations, however, promoted their own sports and games.

Similar to the Olympic Games – the parade and the Opening Ceremony

The event started with the so-called Walking Day – a colourful parade of all participants, dressed in national costumes. We were walking and waving  our national flags, singing, greeting the gathered crowd and marching towards the main Arena in Siauliai.

When walking in this procession, I was delighted with:

The Opening Ceremony began with an impressive, interactive performance about the history, culture and mythology of Lithuania.

Lithuanians showed themselves as a modern, developing nation, at the same time, valuing their traditions, history and culture, including traditional sports.

After this performance, all delegations entered the main stage of the Arena, called after the country’s name by the announcer, waving the crowd gathered at the stands – like Olympians at the Olympic Games.

The Opening Ceremony and the entire, first day of this event made a big impression on me. It was a sport fiesta – a joyful celebration of living together on our common planet and experiencing cultural diversity.

But it was just the beginning. Thanks to traditional sports, this feast continued.

The next day, delegations from around the world began to present their sports and games in the square next to the city stadium in Siauliai and in the other places of this town.

Our team demonstrated two Polish games – Ringnetball and the Chapel.

Ringnetball is a Polish sport, a bit similar to volleyball. Two teams of 4 players (their number may of course change depending on the needs) play on a court divided by a net into two halves. It begins with a serve over the net, like in volleyball.

Then, however, the task of the opposing team’s players is to catch the ball played from the serve and throw it with both hands through one of the three holes in the net (ring-shaped, hence the name of the game).

This is a dynamic game that gives the participants a lot of fun and health and offers them the opportunity to compete in an attractive way.

The Chapel is an interesting and cheerful movement game, played in the past by the shepherds in Kociewie region (Pomerania). Its name comes from the word la capella, meaning the chapel.

2-8 players (their number can of course be changed) form a circle. Everyone has a wooden ball in his or her hand (formerly the Chapel was played with stones). One person goes inside this circle, acting as the Kapelamaster (Chapelmaster). She or he has a cap or a hat on her/his head. Kapelamaster places a small structure of stones, stacked one upon another (called also the chapel), in front of him/her (you can use also wooden blocks).

The first player from the circle throws or rolls a ball towards the chapel, trying to knock it over. Then, he/she runs for the ball and returns to his/her place more or less the same way.

A the same time, the Kapelamaster has to:

If he manages to rebuild the chapel and to hit the running competitor with the ball, before he or she returns to his/her place, the hit person goes inside the circle and becomes a new Kapelamaster.

If he or she is not hit, Kapelamaster remains at his or her place. The next player from the circle throws his/her ball and the game repeats.

Both Polish games, but Ringnetball in particular, were popular from the very beginning.

Before we set up the pitch in a specially designated place, we had spontaneously hung the net between two trees on the lawn of the main, pedestrian street in Siauliai and we had started playing. People from different countries quickly joined this game and it soon became international.

After a while, the Ringnetball game turned into a real festival of sports cultural diversity.

Africans, Muslims (including a Muslim woman in her traditional wearing), Europeans, an Australian, Americans and a Japanese – they all had a great time, playing together.

This situation showed me that traditional sports and games can really unite and integrate people around the world.

It may sound trivial or even banal that people of different nationalities, colours of their skin or religions can play together and integrate, celebrating their diversity instead of creating a cause of conflict from it.

Maybe it is. But, let us think – is our world always like this? Or maybe, we still have so many, unnecessary and stupid conflicts based on differences between people? Does this world need more these kind of initiatives and sports to change this situation? I am sure – it does.

It’s just a game, not “a real life” – someone would say. Perhaps. But if such initiatives and events become more frequent and if traditional sports and games develop in this direction and receive support they deserve, there is a chance to make the world a better place to live. By playing together. Just like that.

Let’s go back to the Event. A lot more happened that day in Siauliai. In addition to the first game shows, like ours with the Netringball for everyone interested, you could also see and experience attractions from various fields of culture:

And that was just the beginning.

The next day was called the World Nations Day, during which there were another, numerous presentations of various sports and games at the stadium in Siauliai. Everyone interested could take part in them.

Among many others, people from all over the world were playing three Polish games:

Ringo is a Polish game (with probable influences of German Ringtennis and English deck tennis), created in the 1950s by a fencer Włodzimierz Strzyżewski, who had initially made it an element of his fencing training.

Today it is a dynamic, recreational game, roughly consisting of throwing a rubber ring (ringo) over a tape or a net (more about this game HERE).

You can play one-to-one, in doubles or even in larger teams. You can use one or two rings, flying at the same time! The latter version is obviously technically more difficult, but very attractive to the players.

During my practical activities, children play ringo and they are often very satisfied with this game. Why? Because Ringo means:

Of course, adults have also a lot of fun with this sport.

Currently, there is even Polish Association of Ringo and International Ringo Federation, which both develop this sport, organizing regular competitions at the national and even international level.

In the second part of my story about the World Sport for All Games, I will describe more games, presented by the other countries during this event in Lithuania.

To be continued soon 🙂 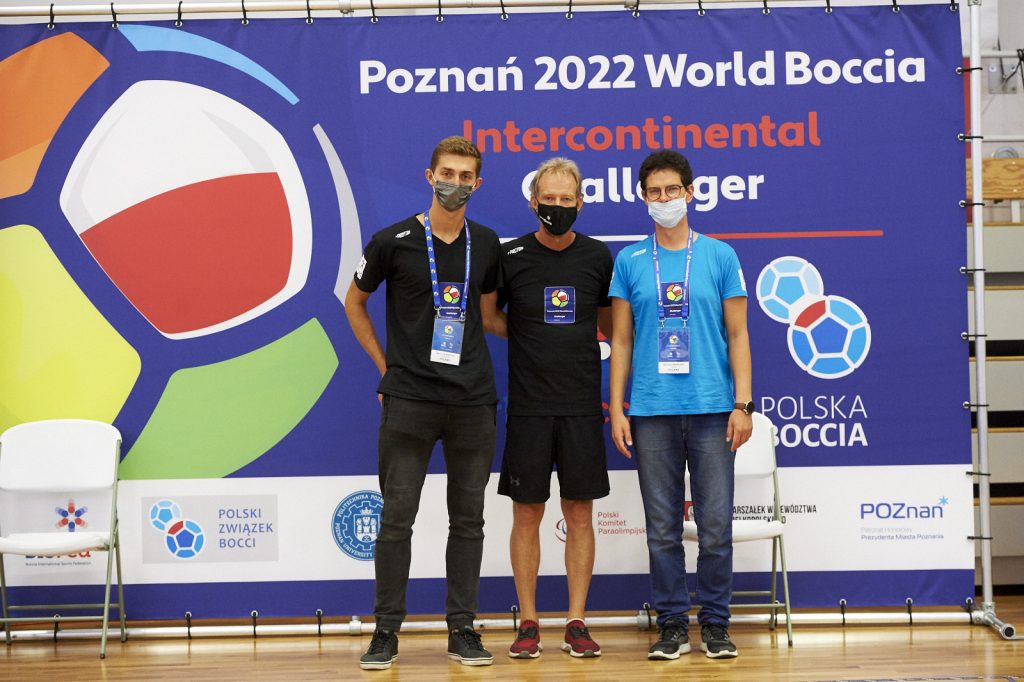